“Wildacker” is an extensive, private game and nature reserve of more than 15,000 hectares which has been exclusively managed as such for more than 50 years.
Large tree-covered, longitudinal dunes dominate the landscape. In the valleys the so-called “Vleis” planes are characteristic, forming rows, one after another. After much heavy rain the shady trees and surrounding water-filled hollows are a chief attraction for many bird species. Here and there termite hills also intersperse the landscape.

Just like the rest of Namibia it is worth a visit to “Wildacker” at any time of year.
During the dry season (May-October) the arid landscape in typical African colours contrasts easily with the numerous and easy to observe animals which then assemble at the waterholes.
In the rainy season (November-April) the flora blossoms and flourishes in anticipation of the rain, particularly of the first great storms. At this time of year birdwatchers especially get their money’s worth.

The variety of animal species at 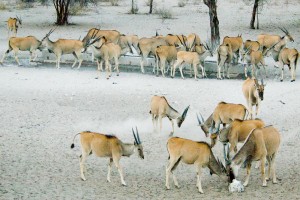 “Wildacker” is particularly diverse. When talking about Big Game it is necessary to mention the Eland antelope in particular, which here in their preferred habitat, assume large numbers. The Eland is the largest type of antelope.

Besides the Eland you will come across lots of Giraffes, Kudus, Oryx and Hartebeest, Wildebeest, Zebras, Impalas, Duikers, Warthogs and Ostriches on the reservation. Aardvarks, Ground Pangolins and Vervet Monkeys appear less often. You will only discover the shy carnivores, including Leopards, Cheetahs, Hyenas and the extremely rare African Wild Dogs if you are very lucky. African Wild Dogs have become particularly rare in Africa and have their last geographic range here.

In the dry season, one is continually surprised by the variety of bird species which populate the seemingly hostile bush. Beginning with the rare Meyer’s Parrots and Rosy-faced Lovebirds, followed by the numerous Hornbills and Grey Louries, Green Wood and Eurasian Hoopoes, Bee-eaters, Sunbirds and Babblers, Whydahs, Guinea Fowls, Francolins and Bustards to the abundant Eagle, Vulture and Owl species.

This abundance of species is further increased during the rainy season due to the influx of additional migrating bird species which will enthral not only ornithologists. When equipped with binoculars and spotting scope you can observe many birds which are already in the garden and at the birdbath. 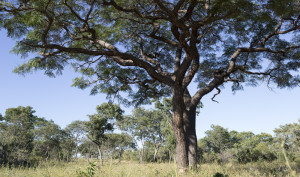 allows a comparatively vigorous stock of trees at “Wildacker”. Besides the widely propagated Camel Thorn Tree (acacia erioloba) found all over Namibia are the Kiaat Tree (pterocarpus angolensis) and Wild Syringa (burkea africana).
More than 40 species of trees and bushes were counted.

Flowers are visible in the rainy season, some of them flowrish 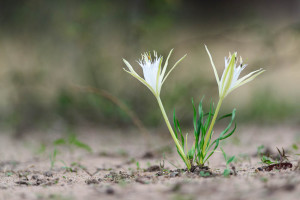 ing after heavy rains only or even once in several years.
Up to now, we’ve counted more than 120 species of wildflowers, among them very nice species such as lilies, amaryllis and gladioli.

For plant enthusiasts we have available botanical photographic guides and own photo books containing all known species of “Wildacker”.
All trees in our garden have been numbered for easy identifying. 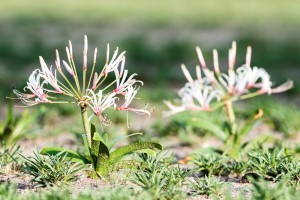